In sports first aid, you may occasionally have to deal with casualties who appear unconscious – for instance as a result of a head injury.  The ‘Dr’s ABC’ is a handy acronym to help you remember what to do in this situation.  Here we explain what DRS ABC stands for, and how to use it.

Another name for the Dr’s ABC is the ‘primary survey.’  In other words, the first steps you should take when faced with someone who seems to be unconscious.  Here are the six stages of the Dr’s ABC:

D – Danger. Your priority when you are trying to help someone in this situation should always be to remain safe and avoid causing any injury to yourself or others. Look and listen for signs of potential risks before you start to treat the unconscious person. If the area isn’t safe, move away from the danger and call 999.

R – Response. You now need to assess how responsive the casualty is and if they are conscious. The first step in this stage is to loudly ask a simple question, such as “Hello, can you hear me?” If they answer clearly, then they are alert and you can move straight on to the last stage of the survey (Circulation).

If they don’t respond verbally, try asking another question in a loud voice close to their ear, such as “Can you open your eyes?” If there isn’t any movement of the eyelids, then give them a firm pinch on both shoulders. If the casualty isn’t alert, this is generally indicates that the person needs immediate medical attention, so an ambulance should be called.

If the casualty is unresponsive to your voice, or a firm pat or a pinch on the shoulder, then they are unconscious and you need to…

S – Shout for help. If there are other people present, tell one of them to ring for an ambulance. If there isn’t anyone to help you, shout for assistance as loud as you can! If possible, you should also send someone to get an automated external defibrillator (AED), so that you can use it if necessary.

A – Airway. In order for the casualty to breathe, they need to have a clear airway. If they are unconscious, the tongue can become floppy and fall to the back of the throat, blocking the airway. The airway can be opened by placing two fingers under their chin and your other hand on their forehead. You then gently tilt the head back and lift the chin. While the casualty’s head is in this tilted position, their tongue will be away from the back of their throat. The head will need to be held in this position, so keep your hands on the forehead and the chin, or enlist a bystander to help.

B- Breathing. Once the airway is clear you need to establish if your casualty is breathing normally. The easiest way to check this is to lower your head to the level of their face and look down their body, from their head to their feet. In this position you will be able to see if their chest is rising and falling, while listening for breathing and seeing if you can feel the movement of their breath on your cheek. You should hold this position for no more than ten seconds. 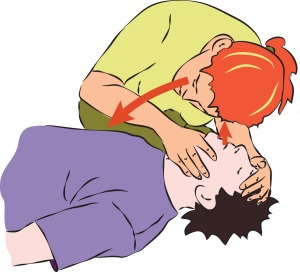 C- Circulation. Once you have checked that the casualty’s airway is clear and they are breathing normally you need to look for signs of major blood loss. If there is any external bleeding, apply pressure to the area and if the bleeding is from a limb, raise the affected arm or leg above the level of the heart.

Injuries or conditions that result in severe bleeding, internally or externally, can be life threatening because of the risk of shock. It’s possible that the casualty may have internal bleeding, so the casualty should be monitored for signs of shock.

If the unconscious person is breathing normally and is showing no signs of severe bleeding or shock, then all you need to do is keep their airway open by placing them in the recovery position.