Cohesive bandage is a multi-purpose, sports strapping wonder-tape and deserves a place in anyone’s taping kit. Here’s part two of our guide to ten great cohesive bandage techniques you should know, helping you treat and prevent injuries from your head to your feet. 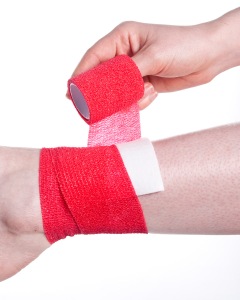 Minor ankle injuries happen all the time in sport, and cohesive bandage provides a cheap and effective way of treating them. After cooling the injury with an ice pack, use cohesive bandage to form a simple support and compression wrap. Start by wrapping around the ankle or foot a couple of times, and then continue in a figure-of-eight pattern around both with the cross-over at the front and leaving the heel open. You should wrap beyond the ankle itself, so that the bandaging comes up the lower leg about as far as a normal pair of socks. Apply the cohesive bandage with only a moderate amount of stretch – if you wrap it on too tightly you’ll cause constriction and end up with a blue foot.

Cohesive bandage offers a fast and simple way of securing your shin pads so they don’t flap or move around, and is particularly useful if you favour the slip-in style of pad. Just wrap the the shin pad onto your leg (a couple of turns is enough,) tear off the tape and press down the loose end. You can either wrap over the entire shin pad, or just do the bottom and the top. 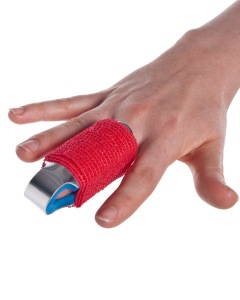 Cohesive bandage is soft and flexible and, unlike adhesive tapes, doesn’t require any pressure to be applied in order to stick firmly. These properties make it useful for strapping splints to very painful injuries like fractures and severe sprains and hyperextensions. It’s a particularly good tape for use with reusable splints you might want to keep – like the sugar tong finger splint in the picture – because it won’t leave any grubby adhesive residue on them.

Yes, we said this was a list of ten uses. Yes, we said they were to do with sport. And yes, we only took this picture because we like playing with the dog. However, it is true that cohesive bandage is widely used on animals because it won’t stick to their fur. So if you’re a pet owner, it is worth keeping a couple of rolls to hand.

Go back to Part One or view our complete range of cohesive bandage.