This is an advanced wrist taping technique for the treatment of wrist pain caused by repetitive movement in sport or daily activities such as typing. It is also highly suitable for the treatment and prevention of paddler’s wrist (aka tenosynovitis of the forearm or De Quervain’s syndrome.)

Before you begin this wrist taping technique read all of the instructions through at least once. It is easier to do if you prepare some of the strapping in advance. If you’re doing it on someone else, have them hold out their forearm in a comfortable position – perhaps supported on the back of a chair or the edge of a table – with the wrist slightly extended. None of the strapping in this technique needs to applied tightly: just place it down with enough pressure for the adhesive to take.

Performed correctly, this technique will allow the wearer to maintain functional movement of the hand and wrist. Therefore it is suitable for a diverse range of sports including rugby, cricket, tennis, canoeing, kayaking and any other physical activity where you might experience wrist pain – even gardening!

Note: you could also use an underwrap or fixing tape to create a base layer to protect the skin, but we have not done so in our example photographs because our EAB is latex-free.

Circle the forearm at about the mid-way point with a strip of the 5cm EAB. This will form an anchor point for the rest of the taping.

You need to cut a strip of the 2.5cm EAB long enough to reach from the anchor point to the base of the fingers plus another 2 or 3 cm to spare. Cut notches at one end of the tape as pictured.

Place the notch between middle finger and ring finger, and fold the short end over the finger web so that it sticks down on the palm side of the hand as pictured. 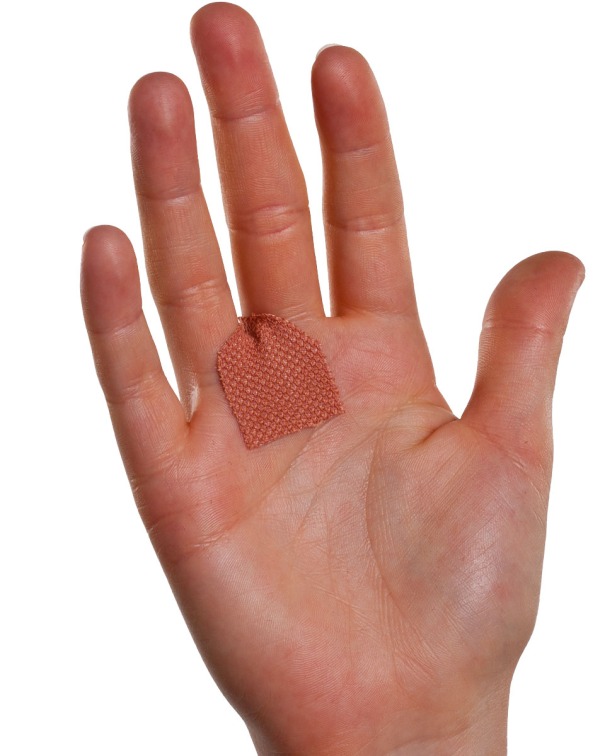 Take the long end of the 2.5cm EAB down the back of the hand and the forearm and stick it to the original anchor point

Create two more of the notched straps. Run one from the first anchor point to between the middle and index fingers, and the other to between the ringer finger and little finger. Again, fold the short ends over onto the palm. These straps may  overlap the first one.

Now take another strap of the 2.5cm EAB from the anchor point, beginning on the thumb side of the forearm. Run this strap up and across the forearm to the meet the edge of the hand just at the base of the little finger. Turn the strap sharply to cross the palm, taping over the base of the fingers and COVERING THE THREE TAGS created by the ends of first three straps.
When you reach the other edge of the hand, turn the tape again to come down the back of the hand and forearm, crossing over to finish at the anchor point on the lateral side (outside) of the forearm.

Repeat step six to create another strap which almost entirely overlaps the first.

Use the 5cm EAB to create a further two anchors to lock the strapping in place. One anchor should be directly over the original anchor on the mid forearm and the final anchor should circle the wrist. That’s it.

Note: if you’re experiencing wrist pain but would prefer to use a brace rather than tape, we recommend the Teyder Gold Hand and Wrist Brace as an excellent alternative to this technique.